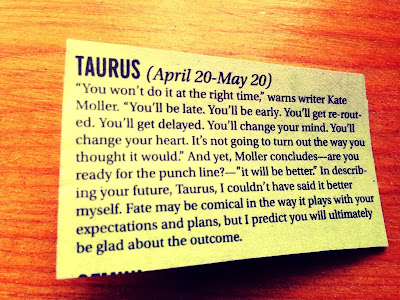 It’s an at home with the sniffles kind of day. In between cups of tea, bowls of soup and naps with the dog, I’m soothing and feeding my mind as much as possible to keep it nourished and content [sitting around and nursing a cold, was not on the to-do list]. This means slowly making my way through the stack of magazines and books that have been accumulating on the coffee table.
It’s not often that I read my horoscope and not because I don’t believe in the practice, but rather due to all of those seemingly bogus horoscopes out there. You know the ones. They say you’ll meet the love of your life on the 19th, an epic fight will occur on the 30th and don’t wear red until next month. They sound more like a random psychic reading pulled out of hat rather than an actual horoscope.
And then there are those horoscopes that are so spot on, it’s hard to believe. In the past few weeks, I’ve been working on defining six month, one-to-three year and three-to-five year goals. Not an easy task. I’ve gone around and around on this the goal setting merry go round. Altogether now, can we say ‘dizzy’?
Although I’ve made considerable progress in the past day or so, I know it’s a process that will ebb and flow, but ‘stumbling’ across my latest horoscope, from a reputable source, has brought some peace to the process.